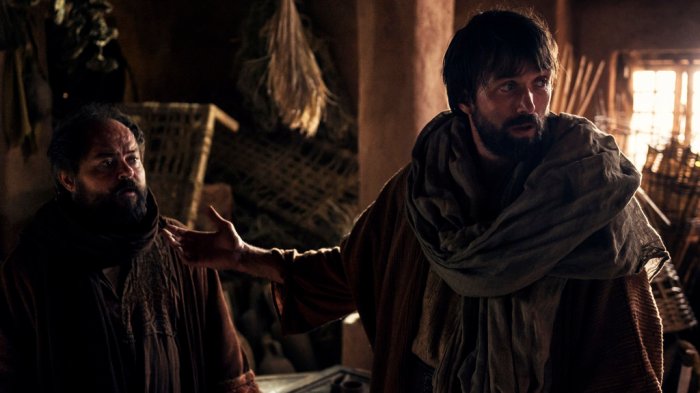 “Now for several days, he was with the disciples who were at Damascus, and immediately he began to proclaim Jesus in the synagogues, saying, “He is the Son of God.” All those hearing him continued to be amazed, and were saying, “Is this not he who in Jerusalem destroyed those who called on this name, and who had come here for the purpose of bringing them bound before the chief priests?”‘

I have always known that Paul had once persecuted those of the faith, but never had I truly considered what he was like before his encounter on the road to Damascus. The image above is from TV series, A.D. The Bible Continues, in which Paul first arrives on the scene as terrifyingly cruel and insatiably zealous. We see that even as Saul, he was a passionate man who could persuade others. He was also very loyal to the temple and high priest, but not quite as loyal as he was towards Judaism. All these traits that Saul had twisted, would be incredibly useful tools in ministry later on. But at this point, they had made him a monster to be feared, and who could not be stopped from his pursuit.

“And I said, ‘Lord, they themselves understand that in one synagogue after another I used to imprison and beat those who believed in You. ‘And when the blood of Your witness Stephen was being shed, I also was standing by approving and watching out for the coats of those who were slaying him.” –Acts 22:19-20

When the Lord wants you, He will take you for His Kingdom and Glory. Saul discovered this on the road to Damascus, which he was traveling towards to acquire letters allowing him permission to arrest and bind any Christian he may find and take them to Jerusalem. In a moment his world was flipped upside down, the truth was undeniable and his eyes were opened. And then he lost his sight.

This was Saul’s defining moment, he received a new identity, he also probably felt the weight of his sin come crashing down on him for he didn’t eat or drink for a few days after this encounter. Now a Christian, blinded, and alone with his confused escorts, he had only one idea as to what to do next. God had given him the name, Ananias, who would be able to heal his eyes.

Ananias also received God’s call to assist Saul. Can you imagine the fear he probably felt? It would be the equivalent of a modern-day Christain being called to heal an ISIS leader. With Saul’s eyes opened, he was immediately baptized and filled with the Holy Spirit. And at once he went to preach the good news in the city.

Remember, Saul’s identity may have been completely changed, but his personality, the traits that made him a man to be feared before, now made him a considerable ally. The zealousness once fueled by hatred was now fueled by love and grace, and could not be contained. Saul is the ultimate go-getter here, and I’m sure Ananias had his hands full.

At once he began to preach in the synagogues that Jesus is the Son of God. 21 All those who heard him were astonished and asked, “Isn’t he the man who raised havoc in Jerusalem among those who call on this name? And hasn’t he come here to take them as prisoners to the chief priests?”22 Yet Saul grew more and more powerful and baffled the Jews living in Damascus by proving that Jesus is the Messiah.

23 After many days had gone by, there was a conspiracy among the Jews to kill him, 24 but Saul learned of their plan. Day and night they kept a close watch on the city gates in order to kill him. 25 But his followers took him by night and lowered him in a basket through an opening in the wall. –Acts 9:20-25

I believe that A.D. The Bible Continues does a great job of portraying this transformation in Saul. Just as he was filled with rage and contempt to the point of being driven to foreign lands after Jesus’s followers, he now carried such a great passion and love that he was driven immediately to the streets to proclaim the name of Jesus.

I never considered what happened next, Saul returned to Jerusalem in the hopes of being welcomed in just as Ananias had accepted him. But instead, he was met with fear and trepidation. It was still fresh in everyone’s minds the kind of man Saul was, the torture he had put the disciples through. Barnabas shared Saul’s story, and through time and the power of forgiveness Saul was accepted as a brother.

The change in his countenance would have been compelling proof enough of Saul’s change. We see this today when people are born again, they seem to carry a light, a weightiness is lifted from their shoulders and something in them comes alive that wasn’t alive before.

Saul’s passion leads him to preach in Jerusalem until the disciples fear that he will be killed for his boldness. They send him away to Tarsus, the land of his birth in the hopes, I think, of him calming down and returning to his family for a while. But I believe that Saul continued to preach and to grow in his faith.

From there we begin to better know Saul as Paul. He helps establish the first churches, guides them, is continually persecuted, and is known best by his letters; Thessalonians, Galatians, Corinthians, Philippians, Philemon, and Romans.

In those letters we see Paul, we get to know his heart, not just for Jesus, but for his brothers and sisters in Christ. What an amazing testimony to the transforming power of God, that a man could change so much. That a monster could become a man of admiration and respect.

This is a testimony we should all remember and cling to. That there is hope for all no matter how far it seems they have fallen. God can restore and redeem anyone. It is His perfect will to save the lost and give them a new identity in Him.

4 thoughts on “From Saul to Paul”