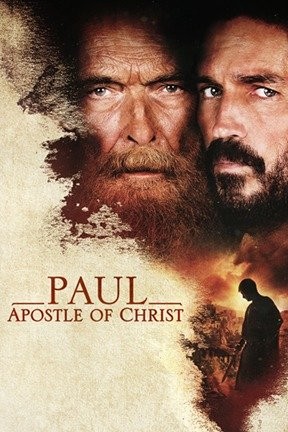 Last night our church watched the new movie Paul, Apostle Of Christ. The movie centered around Paul’s final letter, which became the book of Acts. Written by his dear brother in Christ, Luke the physician. Luke plays the lead role throughout this film, as he is seen not only risking his life to visit Paul in prison, but also challenging his faith and conviction that Jesus is the only way.

Nearly the entire movie is cloaked in the dark horrors of Nero Claudius Ceaser’s circus and rule. Christians are being murdered or tortured throughout the film so I don’t advise children under the age of 13 to watch. Though it is a dark film, it puts in perspective the pain and suffering the early Christians endured. Without Jesus in the flesh to lead them, they leaned very heavily on the wisdom and guidance of Paul. His letters were a source of strength, hope, and comfort. Paul reflected the heart of Jesus to those who had never met Jesus in the flesh.

When it comes to the factual accuracy of the film there are many scenes added in for show, since there isn’t much known biblically about the events proceeding Paul’s final letter. For example, the Bible doesn’t say that Luke traveled to Rome to write Paul’s letter nor that he partook in the healing of a centurion’s daughter, though this particular story is a reference to one of Jesus’s previous healings in Luke 7. Priscilla and Aquila are also a mystery since there is no reason or evidence that they would be in Rome at this time.

Overall, I believe this film merely captured the raw terror and intense suffering the early Christians endured. It showed their desperation and great need for direction as their faith was being tested beyond fathom. It is no wonder they lived for every comforting word Paul wrote to them, reminding them of their call and passion for Christ.

Other than that it is a rather hopeless feeling film with no miracles and little evidence of a Holy Spirit working favor within them. The healing of the centurion’s daughter by Luke seems to give glory only to his own medical expertise. As he is heard saying that he had seen the girl’s particular illness before and that experience gave him the wisdom to know how to cure her.

The end of the film brings only a small glimpse of hope and redemption, but even that is mixed with more pain and suffering. Paul is beheaded and many Christians are killed in Nero’s circus, however, Paul’s final letters make it to the church. lifting their spirits, and Paul is seen being welcomed into “heaven” by none other than those he had killed as Saul. Showing us that he received ultimate peace since throughout the film it appears he is tormented by the sins he committed before the Damascus experience.

I admit that when I first heard about the film, I was hoping to hear Paul tell his story, and it be acted out from beginning to end.  Instead, we see only a glimpse of his story in roughly three short scenes. And the rest of the film is told from Luke’s present perspective.

Despite my criticisms, I applaud the effort and do believe that this film will open many eyes to what it means to be a Christian. That persecution is a promise and that through Christ we can continue to love our enemies and live boldly, even in our darkest hours. There are many Christians right now that are being persecuted, tortured, and killed for their beliefs, and this film does give us a glimpse into that suffering and steadfastness.

Thank you for reading! and God bless!