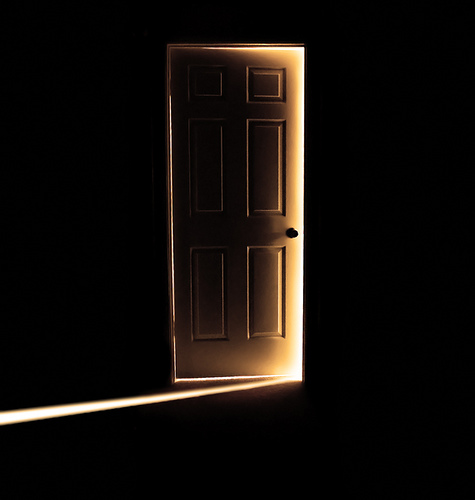 Michael was 14 years old when he gave his life to God. He had witnessed something so profound that his heart was forever changed. It all happened on one Sunday night when all was quiet and a sliver of light could be seen through his bedroom door.

Previously, that evening at youth group, Michael had faced the topic of Heaven. Many of the other teens shared in his ideas of what Heaven looked like, and no one knew what they would be doing for all eternity. His friend, Chase, was with him, and though agnostic, he seemed least flexible in his beliefs about the afterlife.

Chase leaned over and whispered to Michael, “have you ever heard the quote, “I’d rather rule in hell than serve in Heaven?”‘ Michael shook his head, Chase smirked at the other teens who were deep in conversation and continued, “what about you? Heaven doesn’t sound all that great to me, I mean floating around on clouds with harps and such isn’t my style.” Michael frowned at him, “and burning in hell for all eternity is?” Chase scratched his head, “well no, not exactly, but you get what I mean, Heaven sounds boring, I mean haven’t you ever wondered why satan fell if Heaven’s really that great?” Michael didn’t have a ready answer to this, and couldn’t help but feel challenged in his Faith at the question.

That night he lay in bed staring at the small glimpse of light, like a beam, cutting through the darkness in his room. He imagined it was a doorway to Heaven and not just the doorway to the hall. Heaven is full of God’s light he thought, that much was certain.

The image of the doorway remained as he fell asleep. In a dream state, he floated from his bed and plopped gently upon the cold wooden floor before it. The light making him squint and strange smells and sounds greeted him as he stepped closer to the door, hand outstretched. This can’t be right? Maybe his parents were making a nighttime snack and watching a nature documentary, he laughed at the idea. No way! nothing smells this sweet and there’s even a warm breeze coming through! He pushed the door open and gaped at the sight before him.

It was a forest, no, a mountain range, or quite possibly a mixture of all the biomes combined but hardly comparable to earth. The trees were so large and thick that it made earth’s trees look like weeds, and the flowers so brilliant and colorful that Michael forgot to breathe at the display. He saw colors that had never been seen before, and smelled the greatest natural aromas, so pure and strong they put his mom’s case of essential oils to shame. “Where am I?” He asked aloud, amazed at the power and conviction of his own voice, no longer that of a young boy’s whose voice was going through its awkward stage.

He saw his reflection as he bent over a stream, the water was pure crystal and though Michael longed to drink it, he didn’t dare disrupt the image of himself that he beheld. It was a flawless him, a Michael that was more real and complete than he’d ever seen before. This is who I really am? He laughed out loud, unashamed to actually love who he was, possibly for the first time.

A voice called out his name, his real name. Michael’s inner spirit immediately responded and at that moment he was fully aware of who he was and who had spoken.

Jesus walked toward him, the grass and flowers almost bowing as he passed by them. His beauty and purity cast all creation into shadow in comparison. Michael fell to his knees before the Almighty, filled with awesome and all-consuming love. Jesus smiled at him and gestured to the landscape around them, “this is Heaven, the home I’ve been preparing for you.” Michael looked again and noticed more with each new glance, could I ever really uncover all its mysteries? In a place where to turn over a stone, merely opens a new world to explore…

“This is what creation looks like when there are no limitations, the earth is a cursed land that is stunted by darkness. Heaven is free of such boundaries,” Jesus explained as he lifted Michael to his feet. The beauty was so captivating that Michael reached out toward a tree, whose tops shot straight up into the clouds.

He felt the rough skin of the tree, it felt more solid and real than anything he had felt before. Jesus laughed, “yes, this reality is more real than what you know. I created time, a space for my children to exist in, if only for a very short while.” He reached out and placed a hand on Michael’s head, like a father toward his son, he ruffled his hair and said, “that place is not your home, you were made to live eternally…here with me.”

Michael thought of his friend Chase’s words and wished he were here to see what Heaven was really like. If he only knew! Michael thought desperately, Jesus’s face grew sad, reading his thoughts, “Chase is my son too, and I’ve prepared a place for him here also, but he must choose it.” In Heaven, Michael couldn’t help but feel overwhelming hope and joy, and yet he was moved by the passion in Jesus’s eyes for Chase. He has prepared a room for Chase, one that may remain empty…forever.

The nagging question came rushing back, “Jesus, why did satan fall?” Again, his face became sad, “walking among mankind, I’ve seen many forms of evil…pride and selfish ambition being the most destructive, and quite common.” He bent toward a flower, cupping it gently in his scarred palms, it was a radiant flower that shimmered in the light of God, casting rainbows in all directions. Jesus continued, “he was given everything, beauty, power, talent, authority” He glanced at the stream Michael had watched his reflection in not long ago, “he didn’t worship God for what he had been given, instead he looked upon his reflection and chose to worship himself, he longed to become God.”

He’d rather rule in hell than serve in Heaven…

“Hell is a place without my presence, a place ruled by selfish pride. He chose self over God, hatred over love, pride over humility, and ultimately darkness over light.” Jesus turned to Michael, and he smiled warmly at him, despite the weight upon his shoulders, “do not pity him, son, he received what he wanted, and he is not the last…” The words were painful for him to say, and Michael noticed tears in his eyes.

Michael couldn’t imagine turning his back on this place, but most of all he couldn’t imagine turning away from Jesus. “I want to stay here, with you…,” Michael said surely, “but first, I want to lead as many of my brothers and sisters here as possible, so that no room will be empty!” Jesus’s smile grew, “you are such a delight! Do you know how much I love you?” Michael hugged him, and never felt more home in his life.

He opened his eyes and saw that he was hugging his pillow, laying in his bedroom, the light in the doorway, seemed lesser than before. He sat up, raised his hands, and gave his life to God. After that he prayed for Chase well into the night, believing without a doubt that everything, was about to change…

4 thoughts on “The Glimpse”