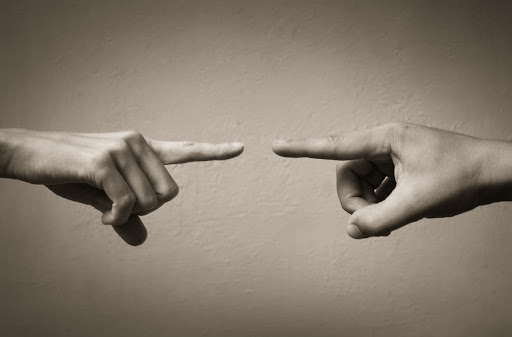 “We should be too big to take offense and too noble to give it.”

Scrolling through social media it appears that the devil has won in his grand scheme to turn America and the world against each other. We the people is fading away and being replaced by us vs. them. You can’t go anywhere without feeling the offense, the fingers pointing at everyone but ourselves. Or have we forgotten the childhood phrase, “pointing is rude,” or “when you point, remember three fingers are always pointing back at you?”

My “point” is simply that we have believed ourselves victims for too long and use that as some mantel of power to victimize others. And for what reason? To what end? Honestly, we are playing into someone else’s hand, like puppets or sheep! It’s becoming sickening and downright impossible to find reason or a thirst for truth anywhere in this day and age.

Something must change. Righteous people must stand up before it’s too late…

“America will never be destroyed from the outside. If we falter and lose our freedoms, it will be because we destroyed ourselves.” -Abraham Lincoln

Good old Abe went down in history for a reason. He was wise, gentle, righteous, and believed in equality. His America is what’s on the line here and if he knew what was happening today, along with all our forefathers, they would be turning in their graves! Why? What they stood for, the America they would have died for, is nearly in the grave itself, all in the name of progression.

Strange the names they give us to describe their movements:

The list goes on, and I’m not typing these to necessarily harp on some of the intentions behind them. Obviously, in word alone, these terms aren’t so bad. At least some of them, such as Black/White/Baby Lives Matter, I mean of course we all agree with that! and Progression in and of itself isn’t a “bad” thing, nor is coming together to seek Sustainable Development or to hold hands and say, “we’re in this together!” And Pro-Choice? I’m pro-choice in that I make choices every day…however…

These innocent terms hide a whole lot of evil in them. I mean, satan would never call something as it is. Just as he would never approach you as the wolf he is, but clothed in sheep’s wool.

So long as the devil is ruler of this world we must always assume an agenda behind such large waves of societal change that involve the gradual erasing of God and His Word. Waves that travel and persuade through victimization, offense, hatred, manipulation, and even violence are all red flags that something is off.

God works in truth and love.

The devil works in lies and chaos.

We’ve taken God out of the equation, we’ve removed the good book from our memory and in doing so, have idolized something in His place. Notice, how I say “we.” I too take ownership of my fellow American brethren, because I am an American. So long as I call this land MY land, and it’s people, MY people, I can’t hide from the atrocities nor can I stand apart from them because we all share the same title.

Makes things a bit more personal doesn’t it? Brings a bit more urgency to the table when you’re reputation is on the line, and you share in carrying the sins of a nation. Now, we can better understand the prophets of old who pleaded day and night for their nation and people to return to God. They never once said, “have mercy on them”, but “have mercy on us (me)!”

Satan stands on the side of humanity. He’s all for us humans staying human and seeking to be gods and to progress apart from God’s Will.

God stands on the side of Christ. When we are born again we are new creations, no longer “just humans” but eternal/righteous/saved beings with power and authority that basic humanity could never give us. We were made to reflect Christ, not Adam. And the only progression we should be seeing in our world and in our lives is a transforming progression into the image of Christ.

Stop taking on the devil’s titles, stop being his sheep. Stop believing in the media and letting them tell you how to feel and when to feel it. Seek first the kingdom of God, seek His Holy Spirit’s guidance in all things and you won’t be manipulated like a puppet.

This year has brought a lot of offense to the surface, and most of it was created and spread very much like the coronavirus fear was. The media has grown that powerful, in that it can plant an idea in the minds of those who watch it and then they sit back and watch that idea become an all-consuming flame of hate/fear/offense, furthering their own agenda and desire for power.

I’m not going to go into detail here on what I believe is happening and why. It isn’t biblical to join in the finger-pointing or to turn our attention and anger toward the flesh. Our battle isn’t against flesh and blood but against the devil at work in people’s hearts. He is guilty of it all. And will pay for his crimes in full.

Our job is to speak the truth in love, to pray, to worship, and to minister to a hurting world and a people/generation that feels fatherless. It isn’t to argue, or to pick sides, or to point fingers.

I’m a woman, a mixing pot of many ethnicities, a mother, a wife, a Christian, and an American. And most importantly, I’m a child of God.

Everyone has a list, an identity, and a value. In fact, everyone is priceless and Christ died for everyone. If we remembered this simple truth, perhaps we would never feel offended, insecure, or victimized. Christ would be enough and love for our brothers and sisters would come naturally as we see it displayed in the hearts of children.

There are alot of things I’m grateful for as we emerge on the other side of this world pandemic. This and pregnancy has forced me to face some fears and lack of trust I still have towards God. What I’ve learned is how grateful I am that He is not done with me yet and won’t be till that fateful day when Christ returns.

I’ve wasted time on my cell, I’ve fallen a few times into the pit of worry or anxiety, I’ve gotten angry and resentful, and I have pulled away from people and God on a few occasions. Some would excuse this behavior as the result of “pregnancy hormones”, but I know better. All those hormones and emotions did was pull my flaws to the surface, my weaknesses.

As motherhood draws near I am even more compelled to change and grow. I don’t even want to go into labor with this fear and honestly chose to believe that I don’t have to suffer through it either. I don’t know to what extent I will be successful, but regardless I will believe that pain and suffering of every kind were paid for in full on the cross.

If God’s will is “on earth as it is in heaven”, and there exists no pain/tears in heaven, than the answer is clear to me what we must seek and believe. These things won’t be possible until we start believing they are God’s will. Our hearts have to reflect His will.

Waiting is the hardest part.

I’ve waited a lot in my life and sometimes it feels like I’m in an endless desert. My mind is tempted to fear in those moments of waiting, and now that I’m 38 weeks pregnant and can go into labor at any time, I feel this temptation to fear again. I keep imagining what I could go through instead of trusting in God and just surrendering to Him and His will. He told me this would be a joyous occasion and oh how faithful He has been so far! Satan has tried to rob this joy from me and has failed many times throughout these 9 months.

Everything is coming to a close.

This virus, this cold winter/spring, this pregnancy is coming to an end…and with it a new beginning for us all.

Turn off the news channels, block out the many voices that are trying to pull fear into the future through their declarations. Seek the Lord and His guidence/discernment and you won’t hear Him saying such things, but reminding you of joy and hope.

It’s no secret what the devil is attempting to do, the sad truth is that despite him using the same old schemes, we still fall prey to them. It’s a cycle of rebellion that goes back to the very beginning. We are creatures of forgetfulness and yet our God is always ready to catch us when we fall, and to fight our battles.

He never gives up on us….on you.

How to Induce labor naturally?

As a first time mother, I have yet to know what methods of labor induction actually work for me. Course, what may work this time could fail me the next pregnancy. It really is a hard thing to pinpoint or to control. Labor ultimately will happen when it happens at God’s chosen moment. Still, it is good to try and bring about what must come since laying around could keep the kid cooking in the womb beyond your due date for sure! Gravity is your friend here and during labor! 👍

I asked many mothers how they induced labor naturally and here are some of their trusted methods, hopefully, this helps!

I have yet to try any of these but just wanted to share what has worked for the mothers in my life in the hopes that it will help other expectant moms out there. If you can’t go into labor, don’t worry! It’s common for your first child to carry up until or after your due date. Your doctor will then make the call on what is best for you and most likely that will involve inducing you in the hospital with Pitocin/Oxytocin (a hormone that a woman produces anyway to induce labor).

Also, don’t expect the first sign of labor to be “water breaking.” The movies make it like this is the first step when really it isn’t all that common for your water to break. This they will painlessly do at the hospital once you are in active labor.

Even if you start getting symptoms, or are dilated, it could still mean days or weeks before you meet your baby. If you are like me and don’t want the unnecessary torture of getting your cervix checked at your weekly appointments, then simply ask not to. It’s your right and honestly, checking the cervix for dilation really doesn’t tell you anything between 35-37 weeks because as I said, you could be dilated for weeks or not at all and an hour after your appointment go into labor lol (that is verbatim what my doctor said).

Just relax, try the steps above when you are feeling energized, and pray that you will meet your baby sooner rather than later. God’s got this! ❤